Kaman Corporation announced that its Aerospace segment has been awarded a commercial sale purchase order for Joint Programmable Fuzes (JPF) in the amount of $35.5 million for an undisclosed customer. Delivery of these fuzes is anticipated to occur in 2013 and 2014. 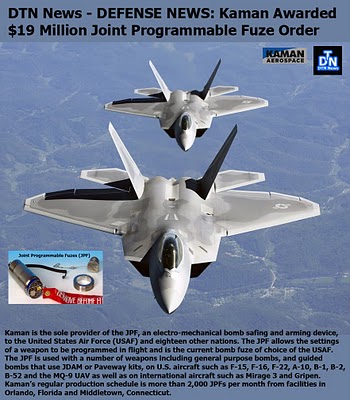 “This order is an endorsement of the functionality and reliability of the JPF and we are pleased to expand the relationship with our current customer base,” stated Kaman Aerospace Group President, Greg Steiner.

Kaman is the sole provider of the JPF to the United States Air Force (USAF) and twenty-three other nations. The JPF allows the settings of a weapon to be programmed on wing in flight and is the current bomb fuze of choice of the USAF. The JPF is used with a number of weapons including general purpose bombs, and guided bombs that use JDAM or Paveway kits, on U.S. aircraft such as F-15, F-16, F-22, A-10, B-1, B-2, B-52 and the MQ-9 UAV as well as on international aircraft such as Mirage 3 and Gripen. Kaman produces the JPF at facilities in Orlando, Florida and Middletown, Connecticut.